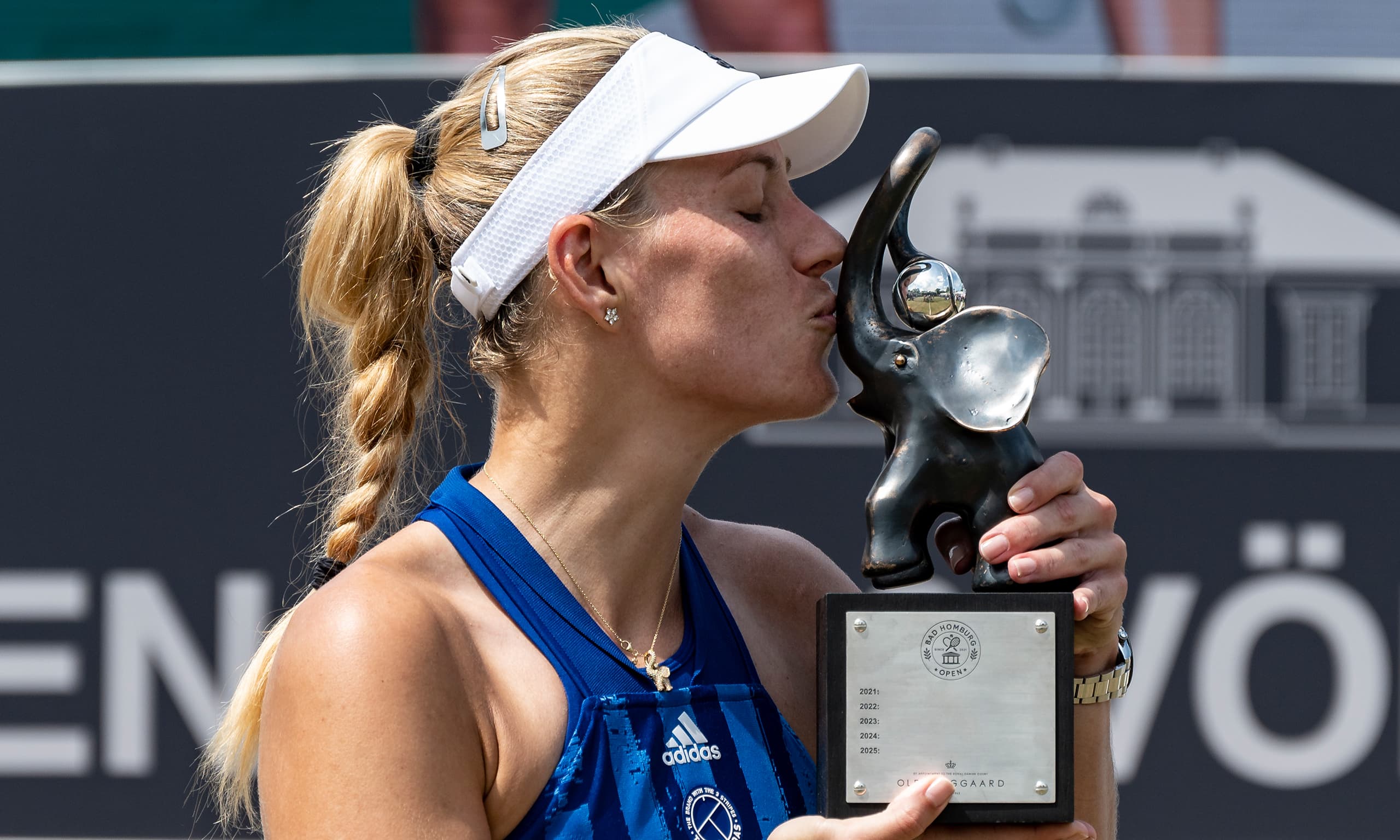 It is a wonderful story with a grandiose ending: Angelique Kerber, the tournament ambassador of the Bad Homburg Open presented by Engel & Völkers, was intensively involved in the planning and organisation of the new grass court event and, especially during the tournament week, endeavoured to optimally fulfil her dual function as player and representative: In the end, she succeeded in doing both perfectly!

The player from Kiel won the final on Saturday at the Spielbank Bad Homburg Centre Court against the Czech Katerina Siniakova with a scoreline of 6:3, 6:2. After 1:25 hours Kerber converted her third match point and was visibly moved afterwards. “This title means so much to me. I’m happy to have finally won another tournament. It couldn’t have gone better. Of course it was a special tournament for me – and I felt incredibly comfortable here.” the left-hander shared in an on-court interview after her “home victory”. Kerber now travels to Wimbledon full of self-confidence, and “without pressure”. The tournament starts on Monday.

At the beginning of the final, Kerber and Siniakova were both nervous. The serve was especially shaky on both sides: Kerber dropped her service twice in the first set, Siniakova even three times. After 43 minutes, Kerber, seeded fourth, won the opening set to cheers of the spectators and looked relieved into her box, where her grandparents were sitting.

However, the world No. 76 Siniakova did not give in even after trailing 0:2 in the second set. Long and intense rallies developed. The fans were thrilled. However, Angelique Kerber managed to pull away, bringing the score from 2:2 to 5:2. A forehand winner gave her the first two match points, but Siniakova fought them off with desperation. Shortly afterwards, Kerber pulled through and was triumphant!

600 spectators cheered the three-time Grand Slam winner on the Spielbank Bad Homburg Centre Court and – as on the previous day – there was even a Mexican wave.

The 33-year-old won her 13th WTA title in Bad Homburg – her first tournament victory since the biggest triumph of her career so far in 2018 on the holy lawn in Wimbledon. Kerber should now start the Major tournament with great self-confidence.

A perfect week ended with a special highlight for the tournament ambassador. And Angelique Kerber made no secret of what this meant to her. “It turned out to be such a beautiful tournament. I’m proud of that and grateful to the people who made this great premiere possible. It was important to me that everyone really felt comfortable here: Fans, spectators and players.”

There was much praise from Kvitova, Siegemund & more for the new grass event in the Kurpark

The organisers also drew a thoroughly positive conclusion after seven days of the tournament and the happy ending for Kerber. The best possible start under challenging conditions is to be followed by a carefree and great tennis festival for the entire region from next year onwards. Among other things, it is planned to make the two side courts in front of the Kaiser-Wilhelms-Bad accessible free of charge. The enormous potential of the grass event with Wimbledon flair is to be fully developed from 2022.

Tournament ambassador Kerber was already pleased with the overwhelmingly positive feedback from her colleagues. “It’s a new event – but I can already recommend it. Everyone involved here knows how to create great conditions,” said, Petra Kvitova, the top seed in the spa town and two-time Wimbledon champion, who found her way to Bad Homburg alongside other top stars (including Simona Halep and Sloane Stephens). In the semi-finals, the Czech Kvitova lost to Kerber (6:3, 4:6, 6:7) in a thrilling match.

Quarter-finalist Laura Siegemund (Filderstadt) also praised the “professional” organisation of the Bad Homburg Open presented by Engel & Völkers: “Everything went like clockwork. That is not always to be expected when a tournament is held for the first time,” said the German number two full of praise.

Local favourite Andrea Petkovic, who was eliminated in the round of 16, was impressed by the character of the boutique tournament, “there is a lot of attention to detail,” emphasised the player from Darmstadt.