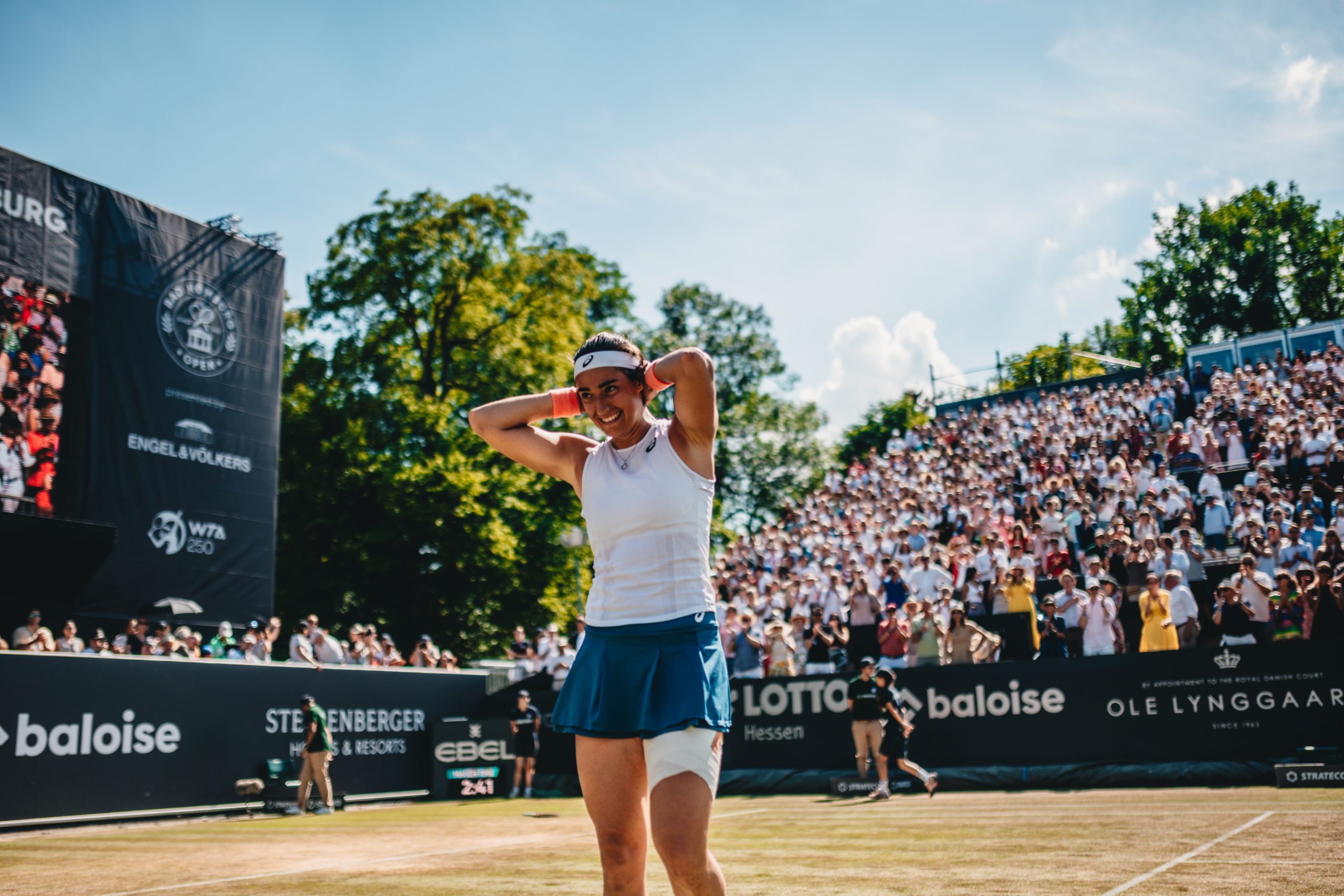 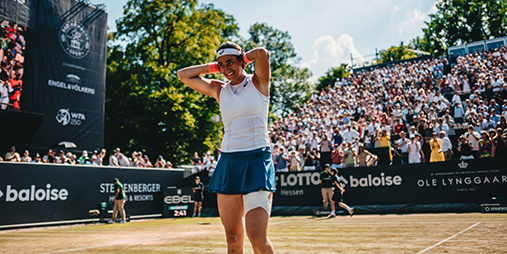 Caroline Garcia began her impressive winning streak at the Bad Homburg Open presented by Engel & Völkers this summer. Four months later, the Frenchwoman is world champion and number four in the rankings.

The 29-year-old really savoured the moment of her greatest triumph to date. Donning a cowboy hat, Caroline Garcia was overjoyed as she lifted the WTA Finals trophy after beating Aryna Sabalenka 7:6 (7:4), 6:4 in Dallas/Fort Worth, Texas. Voilá! It was the culmination of a fantastic season that had begun with her tournament success at the Bad Homburg Open in June.

“Winning the title in the Kurpark gave me a lot of self-confidence”.

Tournament victories in Warsaw, Cincinnati and now Dallas followed. Likewise, “Caro” reached the semi-finals of a Grand Slam event for the first time at the US Open. “I feel immense joy and am just proud of this great season,” said the newly crowned “Ace Queen”, who achieved the most aces on the WTA Tour in 2022.

Caroline Garcia was able to celebrate her first tournament victory in three years at the Bad Homburg Open presented by Engel & Völkers in June. The Centre Court in the historic Kurpark is only half an hour’s drive away from the large Rhine-Main Airport in Frankfurt… and the Frenchwoman is known to have an affinity for flying. Her nickname “Flying Caro” came about because of her flamboyance on the court after successful matches, famously emulating the take off of a jet.

In recent months, “Garcia Airlines” has been very present and popular on the WTA Tour. Moreover, on her successful journey, which began with her victory in the final against Bianca Andreescu (Canada) in Bad Homburg, the popular player from Saint-Germain-en-Laye has been triumphant on three surfaces. She won at the Bad Homburg Open on grass, in Warsaw on clay and at the WTA 1000 in Cincinnati, and now in Dallas on hard court. Which speaks for the adaptability and all-round ability of the 1.77 metre tall right-hander. In the Polish capital, Garcia also managed her first win against a reigning world number one with her quarter-final victory over local hero and French Open champion Iga Swiatek. A few weeks later, she became the first player ever to secure the title as a qualifier at the Western & Southern Open in Cincinnati.

Yet things were anything but promising for “Caro” in the first months of the 2022 season. In May, she was ranked 79th in the WTA rankings – the worst since 2014. But the crash was followed by an upward flight: The collaboration with Bertrand Perret, which ended shortly before the WTA Finals, bore fruit. The French coach had previously paved the way for the Tunisian Ons Jabeur to reach the top. “A lot of things suddenly just fell into place. It’s always hard work, but once things are going and you have the confidence, it’s like riding a wave,” said Garcia, who was previously world number four in 2018. Perret honed the brilliant doubles player’s serve (two Grand Slam titles) above all.

Garcia took another big step at the US Open in the late summer. After Mary Pierce and Amelie Mauresmo, she became only the third French player to reach the semi-finals at Flushing Meadows. As a reward, the WTA Finals consisting of the eight best players of the season awaited her. The outcome: pictures of Caroline Garcia in a shower of confetti and holding the silver trophy made ranks around the world. For her success she received 1.57 million US dollars and 1375 world ranking points.

“Caro” likes to think back to the summer days in the Kurpark. The victory in Bad Homburg gave her “a lot of self-confidence”. Already during the tournament week, she had repeatedly praised the atmosphere. “The stands were full right from the start. There was a special atmosphere, everyone was friendly,” said Garcia, emphasising “Something like that gives us players a lot of energy.”

BIOGRAPHY PUBLISHED: “A VERY SPECIAL PROJECT FROM THE HEART”
Scroll to top