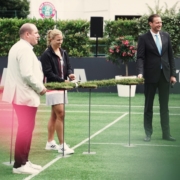 A touch of Wimbledon at the Kurpark

Bad Homburg, 11 July 2020 – On the second weekend in July in 2018, exactly two years ago, Angelique Kerber fulfilled her biggest dream in sports by winning Wimbledon. 728 days later, she again experienced something memorable on her favourite surface. On Saturday, the 32-year old officially inaugurated the Centre Court of the Bad Homburg Open.

”This was definitely a very special feeling. In general, this great atmosphere at the Kurpark and, in particular, this beautifully laid out grass court have increased the anticipation for next year’s premiere even more,” said Kerber, who functions as the tournament ambassador for the WTA event.

The first edition of the Bad Homburg Open had to be postponed to 2021 due to the Coronavirus pandemic. However, on Saturday, a hint of Wimbledon blew through the history-rich Kurpark where the first tennis court on the European continent was built in 1876.

Kerber and the Fed Cup Team Captain Rainer Schüttler, who originates from Hesse, encountered the 17-year old upcoming hopeful Mara Guth and Davis Cup Team Captain Michael Kohlmann in an exhibition mixed on the “Spielbank Bad Homburg“ Centre Court. Guth is one of the biggest German tennis talents and comes from Merzhausen, a part of the city of Usingen.

Kerber was also honoured on this Saturday which was so special for her: Due to her outstanding contributions to German tennis, she was awarded the honorary membership of the German Tennis Federation (DTB).

After the show match, the three-time Grand Slam winner Kerber as UNICEF ambassador, together with her sponsor Generali, handed over a donation cheque in the amount of Euro 25,000 to the UNICEF Children’s Emergency Fund.

Petkovic: “The best gift I could have been given”

Tournament Director Dr. Aljoscha Thron also spoke of a “very emotional and beautiful day for all participants” after the opening event. The enthusiasm for the project is unabated. “The entire team is already working with great enthusiasm to make the fascination of grass court tennis and a hint of Wimbledon come alive at the Kurpark next summer.

Thron also made another encouraging announcement: Apart from the German number one Kerber and the former Wimbledon semi-finalist Julia Görges, Andrea Petkovic will also take part in the Bad Homburg Open next summer.

“When I heard that there will be a WTA tournament in Hessen, I was completely thrilled. To be able to play at home in front of my home crowd at the end of my career is the best gift that could have been given to me,” Petkovic, who comes from Darmstadt, which is about 50 kilometres away, explained. The former world number nine, who has also been convincing as presenter of the ZDF television programme “Sportreportage”, is considered a crowd favourite.

Tickets for the Bad Homburg Open 2021, which will take place from 20 to 26 June and under the motto of “TENNIS IS COMING HOME”, will be available within the next weeks. Tickets can be purchased online in cooperation with our partner Reservix on the tournament website www.badhomburg-open.de or via the hotline (0049 (0) 180 – 60 50 400). Tickets which have already been purchased for the Bad Homburg Open 2020 will remain valid for the tournament next summer. 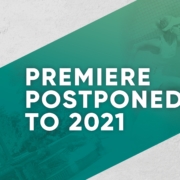 The premiere of the Bad Homburg Open can only be held in the summer of 2021:  After joint consultations of the WTA with the affected tournament organisers, it was decided to cancel the entire grass court season due to the continuing Coronavirus pandemic. Also, the owners of the Bad Homburg Open, the All England Lawn Tennis and Croquet Club (AELTC), cancelled its 2020 Wimbledon tournament as a consequence of the current situation.

“Of course we were all hugely looking forward to the premiere of the Bad Homburg Open in a few months at the historic Kurpark. However, due to the current situation for now, sports interests completely fade into the background. At the moment, there are other priorities,” said Angelique Kerber, who serves as tournament ambassador of the new grass court event. She intends to look towards the future after the end of the Coronavirus crisis “and then the Bad Homburg Open 2021 will play a huge role for me,” the Wimbledon 2018 champion added.

Mission 2021: With “a lot of vigour and full force” into the future

Irrespective of the cancellation, the three tournament courts at the venue of the TC Bad Homburg or in front of the Kaiser-Wilhelms-Bad, respectively, as well as the three practice courts at the Homburger TG will be completed in the coming months. According to our vision, the planning for 2021 shall begin as soon as possible. We will approach this challenge with “a lot of vigour and at full force,” Tournament Director Dr. Aljoscha Thron emphasized.

Tickets already purchased will remain valid for the Bad Homburg Open in the coming year which will be held from 20 to 26 June 2021. Of course, for anyone who wants to return their ticket already purchased, entrance tickets will be reimbursed. Please find more detailed information on our homepage www.badhomburg-open.de/tickets in the coming days.

Only one week after opening the ticket sales at the beginning of December 2019, tickets for the final on Centre Court initially scheduled for 27 June 2020 were no longer available. At the beginning of March, four out of seven tournament days were sold out. Due to the huge demand, we have started discussions about expanding capacities. 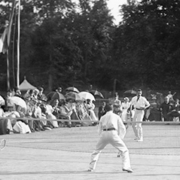 The Bad Homburg Open is a newcomer to the WTA 2020 calendar, but the Hessian grass court event, taking place on the grounds of the oldest tennis club on the European mainland, continues a unique tradition. So the tournament motto is as appropriate as it is appealing: “TENNIS IS COMING HOME”.

The first tennis court on the European continent was built in June 1876 in the spa park of the spa town Bad Homburg. A grass court, fittingly! The lines on the specially short-cut lawn were drawn with lime. At that time, the court still had a “waist”, similar to the cross-section of an hourglass. Two rods served as temporary fixings for the net. The men sported chic white suits and shirts with stand-up collars, and the ladies wore laced-up dresses and Florentine hats as they picked up their rackets.

Speaking of which: British spa guests brought rackets and balls along in their luggage. Sir Robert Anstruther organised these first historical games in idyllic Bad Homburg. In one of the very oldest photographs, we see him in 1876, playing a mixed double with two other men and a woman in the Kurpark (spa park). That same year, the TC Bad Homburg was founded as the first tennis club on the continent. In 1877, just one year later, the first Lawn Tennis Championship took place in Wimbledon.

The TC Bad Homburg grounds remained a popular venue for special events. In 1970, for example, the German Davis Cup team around icon Wilhelm Bungert stopped off in the Kurpark and defeated Denmark. World-class sport was also on display in 1973, when Australian tennis legend Evonne Goolagong and her team won the Federation Cup. A total of 28 teams took part.

In light of this tradition, Angelique Kerber & Co. are saying: “TENNIS IS COMING HOME!” 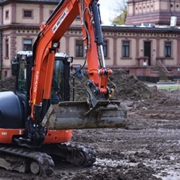 There’s a lot to do, and the work is already well underway: Construction of the new grass courts for the Bad Homburg Open began in early November, with two excavators coming to remove the old sand cover. Centre Court on the historic grounds of the TC Bad Homburg will be the heart of the future tournament complex – a “stage” in the idyllic Kurpark, where 3,500 spectators can experience exciting duels in summer.

Next to Centre Court, two Match Courts will be built, where 250 fans each will find their place. In addition, there are three high-quality training courts on the grounds of the Homburg gymnastics community. “We are very pleased that the work has begun,” says Bad Homburg’s mayor Alexander Hetjes, “this tournament, and Wimbledon’s offer, is like a gift for our city.”

The close cooperation between the Bad Homburg Open and Wimbledon’s All England Lawn Tennis Club (AELTC) is also seen in the construction and maintenance of the courts: The head groundsman of the world’s most famous tournament, Neil Stubley, will regularly accompany and supervise the work. After removing the sand cover from the Match Courts and applying a new layer of soil, the next step will be seeding the grass. 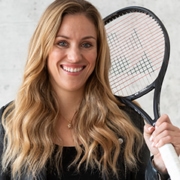 On 14 July 2018, she created Germany’s greatest tennis moment of the century – on that day, Angelique Kerber lifted the trophy to the skies on Centre Court at Wimbledon after her memorable final triumph over US star Serena Williams. Wimbledon, lawn, and Angelique Kerber – it’s a very special relationship, which is now heightened at home, in front of German (and international) fans. Because at the Bad Homburg Open, the new WTA International tournament under the patronage of the All England Lawn Tennis Club, the three-time Grand Slam queen is not just a player competing for the trophy.

For this competition in the Kurpark, on grounds steeped in tradition, Angelique Kerber is much more: She is the face of the tournament, the global ambassador for the tournament – and in the future, after the conclusion of her phenomenal career, she will also become the tournament director. The woman who will give the Bad Homburg Open her own personal touch. “With this tournament, a great dream of mine is coming true. And the Bad Homburg Kurpark is the ideal setting for this event,” Angelique Kerber explains, “it’s important to me to already be involved in many decisions and plans.”

And she’s walking her talk: At the first big workshop of the organisers – the agencies Perfect Match and Angelique Kerber Management – the Wimbledon winner sat at the table and actively participated in the creative exchange of ideas. “I’ve been to hundreds of tournaments over the years. I know what makes for a good event and infrastructure, what the players’ wishes are,” says Angelique Kerber. Early in the new season, the 31-year-old also wants to have her first talks with colleagues to win them over for the Bad Homburg premiere. “I’m sure we’ll have a very attractive field,” says the Wimbledon queen. 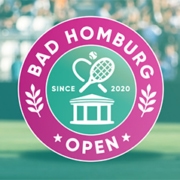 Nearly seven months prior to the first serve at the Bad Homburg Open, advance tickets for the premiere of the WTA lawn tournament start go on sale today (December 3). Tickets for all seven match days of the new WTA event can now be purchased online in cooperation with our partner Reservix.

Take advantage of our Christmas Special: Until 24 December 2019, grandstand tickets for Centre Court are available with a 15 percent discount on the normal price. Day tickets cost between 29 euros and 75 euros.

On Sunday, 21 June, 2020, the International Series event will begin with qualifying matches and the first matches of the 32-draw main field. The final of the 275,000-dollar event will take place on Saturday, June 27, 2020. Centre Court on the idyllic grounds of the TC Bad Homburg has a capacity of 3,500 spectators.

For three-time Grand Slam winner Angelique Kerber, and the other players, the Bad Homburg Open is the ideal “dress rehearsal” for the Championships on Church Road, starting on 29 June, 2020 in Wimbledon. Kerber (31), who will be working as tournament director of the Bad Homburg Open after concluding her sporting career, is already looking forward to this new event in the 2020 WTA calendar.

“I hope that many tennis fans will come to Bad Homburg to experience this tournament with its unique Wimbledon flair,” said Kerber, emphasising that “the Kurpark is the ideal place for a fantastic event in a special atmosphere.”

Mayor of Bad Homburg, Alexander Hetjes (CDU), is also very much looking forward to the WTA event. “We are very proud to be hosting a preparation tournament for Wimbledon,” he said.